The AWP Asiimov is a somewhat powerful early-game single-target ranged weapon. It has higher damage and accuracy than the Ak-47 Asiimov or M4A4 Asiimov, but its slow attack speed and lack of AoE damage makes it less desirable. The AWP Asiimov gives a 10% Drop Rate & Double Drop Rate Bonus. Due to it's inability to compete with equally common weapons like the Ak-47 Asiimov, it doesn't see much use and isn't recommended if alternatives are available.

Currently, it is dropped by the following bosses.

It can currently be obtained from the following boxes and chests:

At the moment, the price of AWP Asiimov is roughly: Template:ItemPrices-A 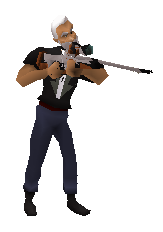