The Mimic Pet is currently obtainable from defeating the boss Mimic after using a Mimic's Entry Ticket to access the boss.

It also has the special perk of adding 150 DSCoins into the players pouch at the same rate as the Emperor`s Necklace, however, increasing your rank does not increase the amount of DSCoins gained. The effect does stack with the Emperor's Necklace bonus and AFK Island's effect.

The price of a Mimic Pet is currently Unknown edit 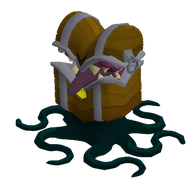 Retrieved from "https://redemptionrsps.fandom.com/wiki/Mimic_Pet?oldid=45947"
Community content is available under CC-BY-SA unless otherwise noted.