This page is a compilation of only the few most popular ways of making money. Of course, whether it be merching or something else entirely, there are plenty of ways to make money which haven't been listed.

Get creative, and forge your own path!

This is the Loadout for beginners.

This is the loadout for Intermediate players.

This is the loadout for Advanced players.

Gambling can be the best way to make money on the server. It is one of the most popular methods to gain wealth amongst other players in Redemptionrsps; however, gambling can come at a cost. The 3 most common ways to gamble are by gambling other players at ::dicezone, using the (grand) Lottery System, and trying your luck with Donation Boxes.

There are currently 3 different Donation Ranks you can obtain throughout the game by opening boxes, killing bosses and do other forms of activies and then there is the 3 paid donation ranks which can be bought by using the in-game command ::donate or through the store. https://redemptionrsps.com/store/store.php?id=54

What kind of Donator Ranks are there?

Membership Ranks is a monthly paid rank purchased through https://redemptionrsps.com/store/store.php?id=54 or by typing ::donate in-game. Players who have purchased any of the 4 different membership ranks will be able to claim rewards daily through the command ::membership.

What kind of Memberships Ranks are there?

What kind of Donation Bosses are there?

In-game deals can be found by using the ::deals command or you can PM an online Administrator to discuss deals $100+ 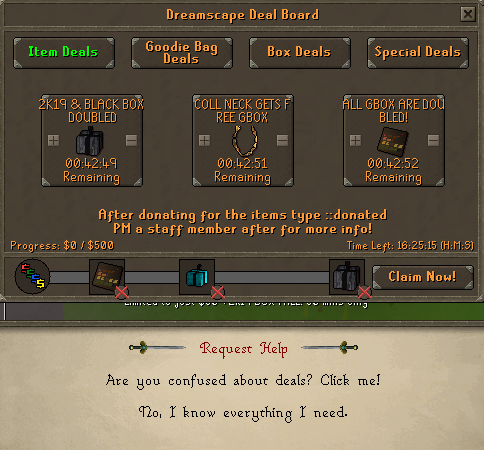 When donating for one of Dreamscape's amazing deals, you will have the opportunity to pick at least one chest from Goodiebag Island! These islands are full of the games BEST items and rewards, test your luck! (These picks are on top of your original donation!) 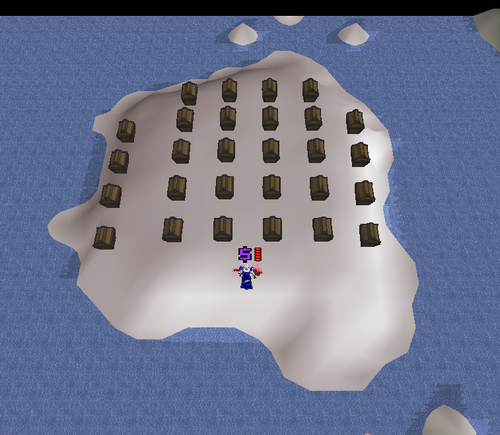 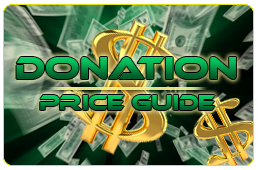 This guide will help you get to know the typical prices when it comes to buying/selling donations, as well as guiding you through the process itself.

Buying Donations from other players is STRICTLY for in-game currency. Any players attempting to buy or sell donations for any non-accepted method will be permanently banned for Real World Trading (RWT).

You must always use a staff member as a middleman for donation purchases.

Before contacting a staff member for a middleman, confirm with both the buyer and the seller the:'

After the donation has been claimed (::donated), the in-game payment will be transferred to the seller and the transaction is complete.

As of November, 11th, 2020 there has been a MAXIMUM amount introduced to buying/selling donations. These MAXIMUMS are as follows:

Never hesitate to pm a staff member in-game if you have further questions regarding the buying and selling of donations!

Donator Tabs are a donation feature introduced with Bonds. Each tab is worth $1 donation credit. While the Bonds are tradeable via black market, the tabs themselves are not. Collecting tabs is a great way to save up for that big donation rather than spending it all at once. You may also have a chance of getting these from the Soul Chest, by completing the DC Universe Arcade, the new Platinum Boss Demonic Guardian, by defeating The Nightmare, and by defeating Lachrym The Undying.

These tabs can be used in a brand new shop containing many of the most sought after donation items, and is located at ::shops. 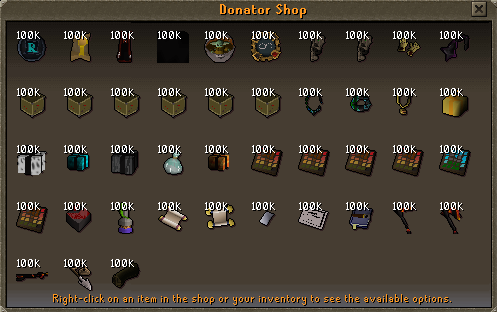 Dreamscape offers the highest quality custom designed items across any RSPS! Players can donate to have their own completely custom item that they can show off to the rest of the DS Gang! These items are truly unique and you will be able to say you have the only set in-game!

You can check out some of our exclusive custom items in-game here: Custom Player Items

HOW TO BUY A CUSTOM